Collector is a Quest in Escape from Tarkov.

To gain access to this quest, most but not all quests in the game need to be completed. There is no clear pattern in which quests are required, since it's decided by the developers and changes with new game updates.

For keeping track of which quests are required, we have added the parameter "Required for Kappa container" in the infoboxes of quest pages. 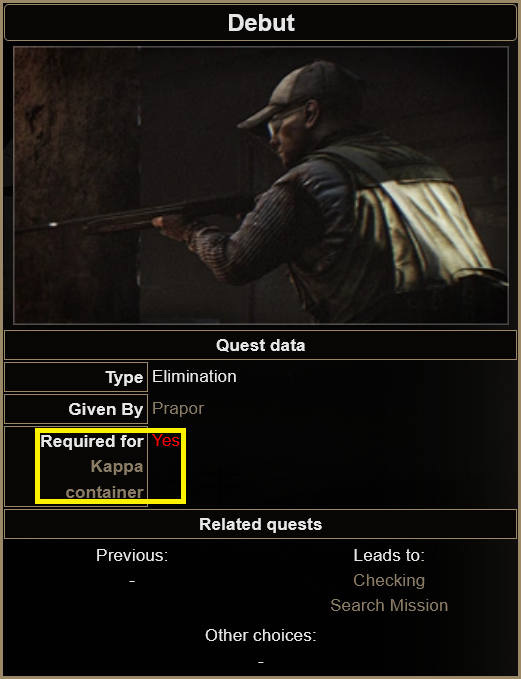 If your experience deviates from our data, please let us know on the talk page or on our Discord.

Solving the riddle starts with the quest description, the first paragraph of the hex encoded text equating to At interchange we were at bash zyxwvutsrqponmlkjihgfedcba pryz1uts8q5onmlkj3hgfe4c2a and the second one to 6t th1 1na of 8t 6ll, 2ou must 58ll th1 58ll6 and UrAgCe DEroRRiM. The first uncovered paragraph indicates the existence of Atbash ciphered text, the text zyxwvutsrqponmlkjihgfedcba pryz1uts8q5onmlkj3hgfe4c2a equating to abcdefghijklmnopqrstuvwxyz kiba1fgh8j5lmnopq3stuv4x2z, a clear substitution pattern. Using the aforementioned substitution pattern, we can take the second paragraph found in the quest description and translate it to 6t the end of it 6ll, you must kill the kill6, a clue which will become useful later along with the UrAgCe and DEroRRiM texts.

The first operation to be applied to the quest reward text seems obvious, either from the DEroRRiM (MiRRorED if mirrored) text or from the nature of the text, it being a simple mirror of the whole text block. After a mirror, the paragraph First truth is, at the base you see the sum of 4 and 6, second truth is that thirteen is false number is revealed, making us understand that the number 13 should be eliminated in all further findings and that the base being used for them will be 64, instead of the human-used 10. Thus, after removing the already used text, removing the number 13 and decoding the text from Base64, we can observe the following text: thirteen is rot ten number as well, rotate yourself out of it which indicates the use of the rot13 cipher. After another removal of our used text and a rot13 decryption we can observe the following lines: Affine brought you two of the first numbers coupled with vjg pwodgt qh uycp ykvjjqnfu hkxg and how many steps should emperor of rome walk, one or three coupled with bgufs efbmjoh xjui txbot, zpv xjmm gjoe zpvstfmg jo b trvbsf pg gpvs / wkhuh lv d vshfldo sodfh wr uhyhdo brxuvhoi lq d vkdsh ri wxeh, wkh vkruw zdb wx.eh which indicate the Affine and Caesar ciphers respectively. After decyphering the Affine encoded text with the values a = 1; b = 2 we obtain the number of swan withholds five and after decoding the Caesar encoded texts with a shift of 1 and 3 respectively we obtain after dealing with swans, you will find yourself in a square of four / there is a special place to reveal yourself in a shape of tube, the short way tu.be, both clues helping later.

To continue, we'll start with the remainder of our quest reward text: 266b2269726c336c4261 a hex encoded string which we should not decrypt for now. The clue the number of swan withholds five shows that 2 (a number which looks similar to a swan) should be replaced by the number 5, doing so in our hex text and then finally decoding it, indicated by the square of four clue, giving us VkUiul3lEa. Looking closely at the obtained string, we can observe the existence of the word killa within it, the clue 6t the end of it 6ll, you must kill the kill6 telling us to remove it from the text. Doing so will finally reveal the text VUu3E which if attached to the UrAgCe string obtained earlier, and being added onto a YouTube short link, as indicated by there is a special place to reveal yourself in a shape of tube, the short way tu.be revealing a YouTube video.

Approximately a week after finding the first YouTube video, a Pastebin link surfaced in the video description. For ease in describing the decryption progress, we'll split the document in 4 sections, one for each paragraph and will start with the last one since it exposes the 1st step within the process.

The paragraph is Base64 encoded, but before decoding it, all characters that are found surrounded by a + character need to be deleted and the contents need to be set aside to form the string 524f543437 which equates to ROT47 in hexadecimal. After the removal of the odd characters, the text File119111====T10p2 ...Be advised, we've got... (transmission interrupted)====end of file is revealed. We can note down the "file number" as the rest is just flavor text.

Using the former ROT47 clue we can solve this paragraph, applying a ROT47 decryption after a Base64 decode yielding the content we need, but slightly malformed. To clear this malformation every 22nd character in the original string needs to be removed (all of the characters being a 0), thus revealing File108070107==== T10p1 Overseer, this is team 8 unit 13 Foreman callsign. We got ambushed, requesting backup.... ====end of file. Like the last paragraph, we can ignore all text besides the file number.

As with the former paragraphs we start with a simple Base64 decode. We can now take the m1560red})>/|:\<({4lphab3t clue and use it as a substitute alphabet while ignoring the importat numbers, giving us the File082056117==== OVRp1 team 10, recon detail, moving to polikhim 1-12. backup call from team 8, unknown detail.... ====end of file string, which again, can be disregarded besides the file number.

Concatenating all file numbers together yields 082056117086078121108070107119111. If we group the characters and get their coresponding ASCII character, we obtain R8uVNylFkwo which leads to the final YouTube video. The video has a few game keys in its description.The key are all activated and not available anymore.

The second found video is reused into an official short movie called "Raid".