Greetings fellow escaper!
The editorial team is currently collecting the last bits of information to smooth out remaining inaccuracies. If something struck your eyes, let us know on our discord.

The map of Escape from Tarkov consists of 12 different locations of which 8 have been released so far. While all maps are to be connected eventually, for now they are all separated from each other.

The map below links to the locations the player can deploy to. 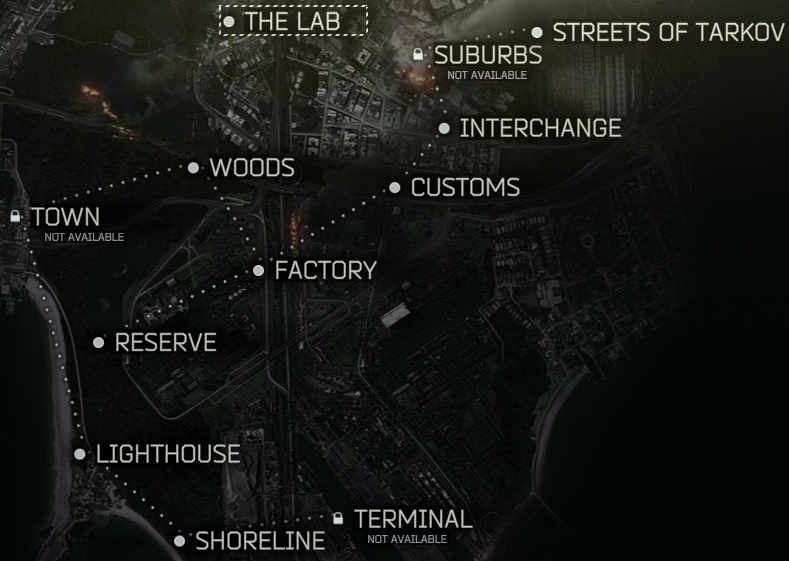 Minefields are usually marked by warning signs, but there are also a few unmarked ones (e.g. north of the USEC Camp on Woods).
The mines are invisible, respawn after they detonate and can only be triggered by players. It is therefore impossible to detect a mine, let alone clear a minefield.
While they are used to create artificial borders on Woods, they can also be found scattered around the water treatment plant on Lighthouse and near the "CCP Temporary" extract on Shoreline.

Border Snipers are marked by various warning signs.
They are invisible, non-killable and can shoot through any object.
They should be avoided under all circumstances, not at last because the player's health will be set to 1% after dying to them.
It is therefore essential for survival to retreat immediately when being targeted by a one, as taking cover is pointless.
They are used to create artificial borders on Customs, Lighthouse, Reserve and Woods.