You noticed wrong or missing information? Tell us on our discord server or learn how to edit.

Santa Claus is a Event Boss in Escape from Tarkov.

Santa Claus has different health values to PMCs and other Scavs.

He wanders each map and if he encounters a Player, will not be hostile (Unless fired upon). If you approach him, he will drop a random item, gesturing and looking at it until taken.

If killed, you will lose significant Scav karma (-0.50 - -1.50). His bag does not contain the loot he can trade with the player, only one christmas tree ornament and other loose items, his chest rig can also contain an ornament.

Khorovod refers to a traditional russian dance, meaning "circle dancing and chorus singing". This can be seen in Tarkov occasionally during the "Gifter" event. Nearby Scavs will move to the tree and walk in a circle around the christmas trees on each map, while firing into the air and shouting. This includes Bosses and Guards.
Shooting one of the Scavs here, or throwing a grenade near them will stop the dance and all will immediately aggro onto the player. There appears to be a cap of 6 scavs in the dance at once. 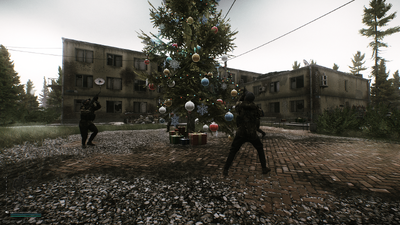