The notorious Terra Group international corporation is one of the many foreign companies responsible for the illegal activities and research within Norvinsk, and one of the key players in the scandal that turned the prosperous frontier into a collapsed war-zone. USEC is believed to act as a proxy private army, protecting the company from investigation by any means necessary.

Terra Group is a transnational holding company whose subsidiaries engage in a wide range of activities. It incorporates over 40 large enterprises, represented by branch offices in over 120 countries of the world.

Is a UK-based private limited company, a subsidiary of the Terra Group international holding. The company officially deals in scientific research concerned with biotechnology applied in agribusiness industry and farming and is strongly implicated in illicit activities across Norvinsk and Tarkov. 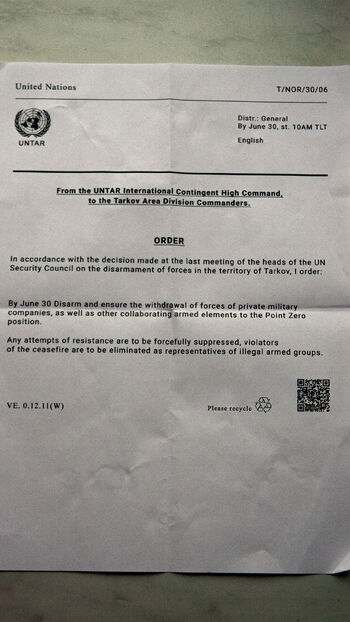 This Teaser image contains a QR Code, which when scanned will show the Latin phrase:

When translated to English, this phrase means "Strength in the Science. Knowledge is very strong. The eye of God is watching us."

"Virtus in Scientia" or "Strength in Science" is the motto/slogan of Terra Group Labs. This phrase being on an UNTAR document, although nothing is confirmed in-game or by Battlestate Games themselves, indicates Terra Group may be ran by Cultists and has direct control or influence over UNTAR. Terra Group may be using UNTAR soldiers as a replacement for the absent USEC operatives.